In 2017 Sweatman and Tsikritsis proposed that Pillar 43 from enclosure D at Gōbekli Tepe was thought to encode a date using precession of the equinoxes, where the animal symbols represent familiar constellations and the circular disk symbol represents the position of the sun on the summer solstice

by TheStrangeTales
in Ancient, Featured
A A

Situated in southern Turkey near the upper Euphrates, Gōbekli Tepe has become famous for its surprisingly advanced megalithic architecture and symbolism, seemingly too early for the hunter-gather culture that built it.  Enclosure D at Gōbekli Tepe is dated to around 9500 BC, although it is obvious that Gōbekli Tepe’s origin must significantly predate this.
How, and more interestingly why, did its builders make such a magnificent structure at such an early time? Something utterly dramatic must have happened to motivate them. This mystery has attracted many to try and interpret the symbols that cover its megalithic pillars. Archaeoastronomy likely holds the key. Considering that Gōbekli Tepe sits at the threshold of the origin of civilization in the region, anything one can learn about this issue is profoundly important. 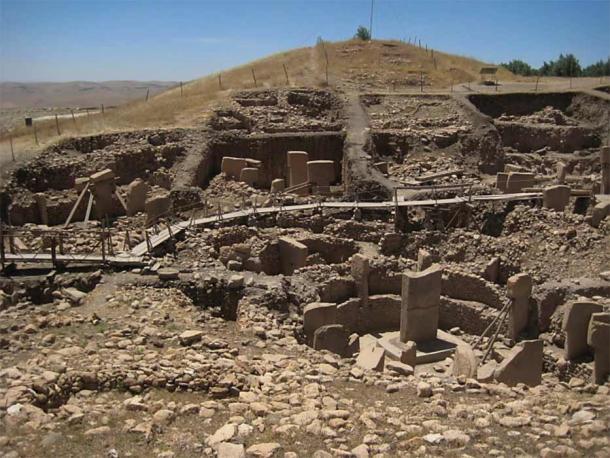 Left: G ōbekli Tepe, southern Turkey, with its round temple-like enclosures of megalithic pillars. Right: plan view of enclosures A to D, with T-shaped pillars represented by filled rectangles.

In 2017 Sweatman and Tsikritsis proposed that Pillar 43 from enclosure D at Gōbekli Tepe was thought to encode a date using precession of the equinoxes, where the animal symbols represent familiar constellations and the circular disk symbol represents the position of the sun on the summer solstice. The date apparently ‘written’ on the pillar, taking the head and wings of the vulture/eagle symbol to represent the teapot asterism of Sagittarius, is consistent with the Younger Dryas impact to within a hundred years or so.
Other pillars at Gōbekli Tepe appear to support this interpretation. For example, the fox and tall birds on Pillar 33, from which a tangle of snakes leap out, can be interpreted as a very nice picture of the Taurid meteor stream. This is because when Gōbekli Tepe was occupied, roughly 10,000 BC, the Taurid meteor stream would have emanated from Aquarius (the fox) and then Pisces (the tall birds) over the course of a few weeks. And it is this meteor stream that is credited with providing the cometary debris for the Younger Dryas impact, circa 10,800 BC. It is possible, then, that this mighty extinction-level event, which is now essentially confirmed and is thought to have triggered a mini Ice-Age lasting over 1,000 years, also sparked the development of civilization in the Fertile Crescent of south-west Asia.
Please read more at: Possible lunisolar calendar systems at Gobekli Tepe and Karahan Tepe (martinsweatman.blogspot.com)

Göbekli Tepe (Turkish: [gœbecˈli teˈpe],[2] “Potbelly Hill”;[3] known as Girê Mirazan or Xirabreşkê in Kurdish[4]) is a Neolithic archaeological site near the city of Şanlıurfa in Southeastern Anatolia, Turkey. Dated to the Pre-Pottery Neolithic, between c. 9500 and 8000 BCE, the site comprises a number of large circular structures supported by massive stone pillars – the world’s oldest known megaliths. Many of these pillars are richly decorated with abstract anthropomorphic details, clothing, and reliefs of wild animals, providing archaeologists rare insights into prehistoric religion and the particular iconography of the period. The 15 m (50 ft)-high, 8 ha (20-acre) tell also includes many smaller rectangular buildings, quarries, and stone-cut cisterns from the Neolithic, as well as some traces of activity from later periods.

The site was first used at the dawn of the Neolithic period, which in Southwest Asia marks the appearance of the oldest permanent human settlements anywhere in the world. Prehistorians link this Neolithic Revolution to the advent of agriculture, but disagree on whether farming caused people to settle down or vice-versa. Göbekli Tepe, a monumental complex built on the top of a rocky mountaintop, far from known sources of water and to date produced no clear evidence of agricultural cultivation, has played a prominent role in this debate. The site’s original excavator, German archaeologist Klaus Schmidt, described it as the “world’s first temple”: a sanctuary used by groups of nomadic hunter-gatherers from a wide area, with few or no permanent inhabitants. Other archaeologists challenged this interpretation, arguing that the evidence for a lack of agriculture and a resident population was far from conclusive. Recent research has also led the current excavators of Göbekli Tepe to revise or abandon many of the conclusions underpinning Schmidt’s interpretation.[1]

First noted in a survey in 1963, the importance of the site was recognised by Schmidt, who directed excavations there from 1995 until his death in 2014. Since then, work has continued under the auspices of Istanbul University, Şanlıurfa Museum, and the German Archaeological Institute, under the overall direction of Turkish prehistorian Necmi Karul. It was designated a UNESCO World Heritage Site in 2018, recognising its outstanding universal value as “one of the first manifestations of human-made monumental architecture”.[5] As of 2021, less than 5% of the site has been excavated.[6]