Whatever the new office reveals, he worries it will only further convince those who want to believe — whether because they’ll say the government is finally acknowledging the truth about aliens or because it’s still covering up the good stuff

WASHINGTON — The U.S. government is finally getting back into the UFO business.

And depending on which UFO believer you ask, it’s either a historic step forward to getting to the bottom of conspiracies or a ploy to regain control of the narrative — and possibly even prepare for interplanetary war.

The establishment of a new office, signed into law just before New Year’s, to study “unidentified aerial phenomenon” has divided the loose community of activists, researchers and pseudo scientists who hunt for proof that we are not alone in the universe.

Some hail the legislation creating the new office, tucked into section 1683 of the massive National Defense Authorization Act, for bringing new resources, rigor and officialdom to the investigation of a phenomenon — and a potential national security threat — that has long been stigmatized in a way that makes it difficult to study.

“Our national security efforts rely on aerial supremacy and these phenomena present a challenge to our dominance,” said Sen. Kirsten Gillibrand, D-N.Y., who spearheaded the bipartisan measure. “The United States needs a coordinated effort to take control and understand whether these aerial phenomena belong to a foreign government or something else altogether.”

It’s been decades since Washington formally studied UFOs in any kind of comprehensive way, so one might expect the news would be cause for celebration among so-called ufologists. 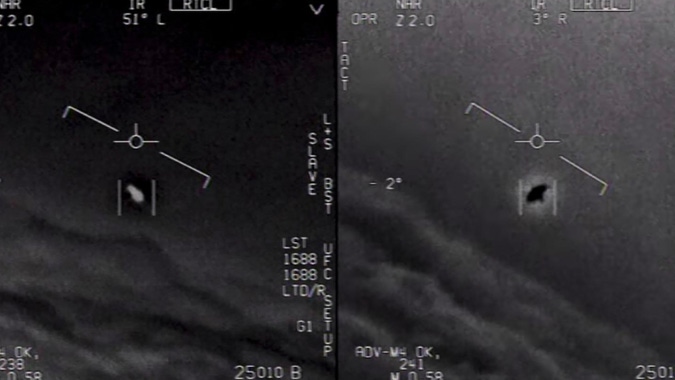 But the movement has long believed the government is covering up the greatest secret in history, so many are having a hard time believing the feds want to do anything other than clamp down again after several years in which it became socially acceptable for former presidents and CIA directors to talk publicly about weird things they’d seen in the skies.

On social media and forums like AboveTopSecret, a hub of ufology and conspiracy theories, debates have raged about whether the new office represents the beginning of the end of the alleged cover-up or its revival.

“This is a subject with a provable history of secrecy, and anything that lacks a new openness about the information is subject to more, possibly inappropriate control,” said Ron James, a spokesperson for the Mutual UFO Network, which bills itself as “the oldest and largest UFO organization in the world.”

Luis Elizondo and Christopher Mellon, the former government insiders who helped spark renewed interest in Unidentified Aerial Phenomena, or UAPs, as they are more commonly known now, by publicizing video from military aircraft, applauded Gillibrand’s amendment — but worry it was watered down before final passage and will be buried by the Pentagon.

In an op-ed in The Hill, Elizondo criticized the Pentagon’s decision to place the new UAP office inside the Office of the Under Secretary of Defense for Intelligence & Security, which he said is the “perfect place to put it” if “we want 70 more years of secrecy on this topic.”

Activists complain about the lack of civilian involvement in the new Pentagon office and assume it will simply classify anything interesting it finds, so that its unclassified reports to Congress will be little more than fig leaves.

Dr. Steven Greer, who retired from the emergency room to pursue the hunt for aliens as the self-described “world’s expert on UFOs,” objects to the notion that UFOs should be treated as a national security threat at all.

As he sees it, aliens are here to help us and the military-industrial complex is hyping their danger and creating the U.S. Space Force to prepare for interplanetary war, arguing movies like “Independence Day” are part of “a false narrative created by covert groups striving to generate fear of ETs.”

But Stephen Bassett, the only lobbyist in Washington dedicated to the “formal acknowledgement by the U.S. government of an extraterrestrial presence,” as his official lobbying disclosure puts it, sees this moment as the culmination of everything he and others have been working toward.

“No, this isn’t a new psyops program. It is a planned effort to end the truth embargo,” Bassett said. “While I appreciate those who are skeptical, that group has tried to find the dark side of every development — the hidden hand.”

Instead of a renewed cover-up, Bassett views the new office as one piece of a multiyear plan by a faction of insiders to finally force the government to reveal that it has had contact with aliens for decades.

“This is a sea change brought about by the work of thousands of people and activists over 70 years,” he said. “But some of these people can’t help but see it as a clever black ops mission.”

The Department of Defense moved quickly to set up the new Airborne Object Identification and Management Synchronization Group, which will “synchronize efforts across the Department and the broader U.S. government to detect, identify and attribute objects of interests,” according to the Pentagon.

The military has made it clear it’s mainly focused on incursions into restricted airspace, such as military bases, and has talked more about drones and new technologies developed by the Russians, Chinese and other earthlings.

The language of the legislation itself goes a bit further, calling for rapid field investigations of UAP incidents, including “adverse physiological effects.” It envisions the “testing of materials, medical studies, and development of theoretical models,” as well potential future investment, to “replicate any such advanced characteristics and performance” discovered.

To Mick West, a prominent UFO debunker and villain of the ufologists, the believers have “kind of hijacked real issues,” which is that military pilots have seen things they can’t explain.

“If you read the text of this legislation, it seems to reflect concerns of the extraterrestrial hypothesis believers,” he said. “Now the military is sort of forced to jump through some slightly silly hoops while doing serious work.”

Whatever the new office reveals, he worries it will only further convince those who want to believe — whether because they’ll say the government is finally acknowledging the truth about aliens or because it’s still covering up the good stuff.

“I think it’s going to clear some things up, but also going to add some fuel to the fire,” he said.