FBI cracks the case of the 4,000-year-old mummy’s head

The sheer age of the head, and the desert environment it was found in, made it particularly difficult to extract DNA. As Odile Loreille, a forensic scientist at the FBI, explains, DNA degrades faster in hot conditions. This understanding led to the belief that nobody would ever be able to retrieve DNA from ancient Egyptian remains, she says

by TheStrangeTales
in Ancient
A A

The FBI has solved the mystery of the identity a 4,000-year-old mummy, after extracting DNA from its tooth.

Since 1915, when the severed head of a mummy was discovered in the corner of a looted tomb in the ancient Egyptian necropolis of Deir el-Bersha, archaeologists have puzzled over its identity. Despite deciphering that the tomb belonged to a governor named Djehutynakht and his wife, they have long deliberated over whose head it was.

“We never knew whether it was Mr Djehutynakht or Mrs Djehutynakht,” says Rita Freed, a curator at the Boston Museum of Fine Arts (MFA), that has stored the tomb’s entire contents since 1920.

Now, almost 100 years later, thanks to research by the FBI published last month in the journal Genes, they can definitively say the head was male and that it belonged to the governor himself.

For Freed, this not only marks the culmination of a century-old archaeological enigma, but is also a testament to the technological advances in DNA testing. “We now know the FBI has developed a technique to reconstruct the very most degraded DNA. If they can reconstruct DNA from a 4,000-year-old tooth, they can reconstruct it from just about anything,” she says.

The sheer age of the head, and the desert environment it was found in, made it particularly difficult to extract DNA. As Odile Loreille, a forensic scientist at the FBI, explains, DNA degrades faster in hot conditions. This understanding led to the belief that nobody would ever be able to retrieve DNA from ancient Egyptian remains, she says.

It’s only within the last few years that this has been proven wrong — in 2017 scientists in Germany decoded the genome of ancient Egyptians for the first time.

The damage endured by the mummified head made it even more difficult to analyze. It was found at the bottom of a 30ft pit, in a tomb that had been ransacked and robbed in antiquity. The looters had stolen most of the jewelry and precious metals, dislodging the couple’s corpses in the process. The decapitated head was found on top of the governor’s coffin. 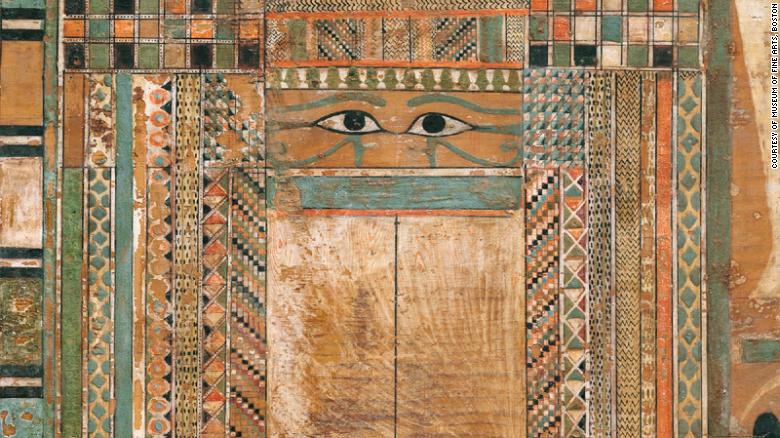 Modern archaeologists damaged it further when handling the head during the various attempts at identification since its discovery.

In the early 2000s, in preparation for an exhibition on the tomb and its contents, the MFA reopened the case, making it their mission to solve the mystery of the mummy’s identity. Being in Boston, a so-called “medical Mecca,” Freed did what she says seemed natural: “We contacted Massachusetts General Hospital, the neurology department, because after all, we had a head.”

In 2005, the hospital performed a CT scan on the mummy, but was still unable to determine whether it was male or female. All the scan revealed was that certain cheek bones and parts of the lower jaw — features that could have held clues to the mummy’s sex — had been removed in a highly skilled surgical procedure. Researchers suggested this could have been linked to the ancient Egyptian “opening of the mouth” ceremony, which was intended to enable the dead to eat and drink in the afterlife.

Four years later, the hospital tried to test the head’s DNA, by extracting its tooth — the part least likely to be contaminated, because of the protective enamel. But to no avail. 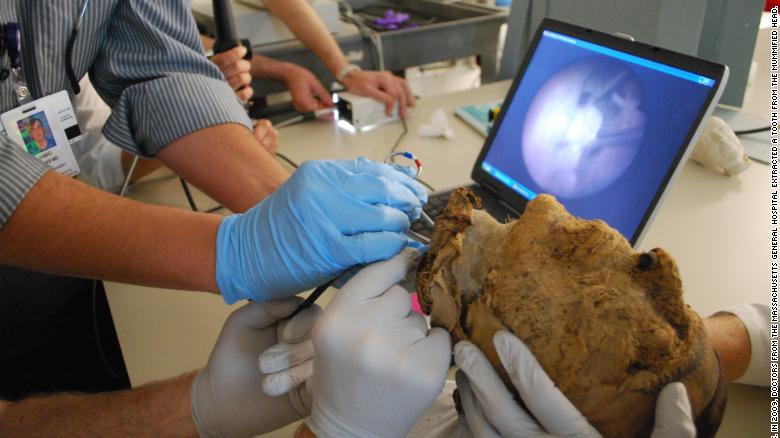 In 2009, doctors from the Massachusetts General Hospital extracted a tooth from the mummified head.

This is when the FBI came in — “a very unusual partner,” Freed admits. The US investigation unit reached out to the museum, attracted by the unusual sample.

It was not so much the historical significance of the mummy that appealed to the FBI, but the scientific challenge it could pose, Anthony Onorato, chief of the FBI’s DNA support unit, tells CNN.

“What we work with is evidence, and evidence is just everyday items that happen to be associated with a crime scene” he says.

Such evidence has often been exposed to extreme conditions, so the FBI saw the mummified head as an opportunity to practice extracting DNA from contaminated materials.

“It’s not like the FBI has a unit — like an X-files unit — that just does historical cases,” says Onorato. “It’s that we’re actually trying to develop criminal procedures using historical items.” 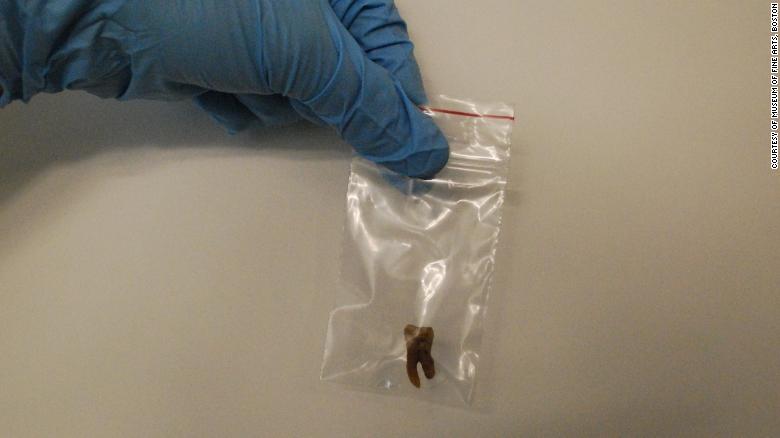 So, in 2016, the ancient dental crown was handed to Loreille, who has a successful track record of extracting genetic material from very, very old bodies. She has previously analyzed the DNA of a 13-month-old child who drowned on the Titanic and a 130,000-year-old cave bear.

But even Loreille wasn’t optimistic. “I didn’t think it was going to work, I thought it would be too degraded, or that there would not be enough material,” she says.

The forensic scientists set to work: they drilled into the tooth, collected the powder, dissolved it in a chemical solution, ran it through a DNA copy machine and then a sequencing instrument. Once they had obtained the data, Loreille studied it, checking the ratios of sex chromosomes in the DNA sequence. From this, she could determine that the skull was male.

“I was very happily surprised,” Loreille says, “we got lucky.”

When Freed read the research, she was overjoyed, and not just because the sex had finally been revealed. “It’s a wonderful example of the museum and science working together,” she says. The discovery “brings it right up to today — from 4,000 years ago to the cutting edge of science.”

The case could have vast implications for crime solving.

When the technique used successfully on the mummy, known as hybridization capture or next-generation sequencing, is routinized and the method accepted, it will be “game changer,” Onorato said.

“I think what we’ve done, and what it means, is we’re on the cusp of another transition in forensic science,” Onorato said.

That could mean closure for the thousands of families who have submitted DNA samples to laboratories across the country as they try to identify the remains of a missing loved one.

In one of the rooms at the FBI’s gleaming facility in Quantico, Virginia, a double-door freezer filled with rows and rows of the samples and unidentified remains takes up nearly half of a wall.

Sealed inside small, white envelopes, each scrap of evidence comprising the law enforcement agency’s DNA archive represents a mystery — but now, also an opportunity for hope.

“Most of the skeletal remains we get have been in not the best conditions — they’ve been out in the elements, exposed to heat or a lot of humidity,” said Connie Fisher, the missing persons program manager in the DNA Casework Unit at the FBI laboratory.

“You’re going to see our success rates go up,” Onorato said. “There are going to be fewer and fewer samples that we’re not going to be able to characterize.”

For the FBI’s scientists who toil each day in the unsolved cases, the technological breakthrough evokes a “very good feeling.”

“I’ve met some family members that have missing loved ones and it’s very difficult for them to not know what’s happened to their loved ones,” said Patricia Aagaard, the FBI laboratory’s missing persons and international program manager for the CODIS Unit. “To know that you’re providing some sort of help to them, some sort of answer, it’s a very rewarding job.”