Physical Proof? Bob White and His Mysterious Object That Fell From a UFO

Any such alleged evidence is always whisked away by the military or covered up, leaving us with only stories. Yet, on occasion, we get a story of a piece of UFO or something of the sort, and one of these is the tale of a man who claimed to have retrieved a mysterious artifact dropped from an alien craft over the desert

We recently came across scientific data that linked Bob’s object with the planet Mars. Isotope abundance ratio tests were performed on Bob’s object in May 1999 in La Jolla, CA and the numbers are virtually the same as obtained from Martian meteorite samples

Of all of the types of evidence that have been put forward over the years for UFOs, certainly, the most sought after is physical proof, something we can see with our own eyes and touch. It is a type of evidence that has remained frustratingly elusive over the decades, and considering the thousands of UFO sightings on record and the numerous reports of actual UFO crashes, one might think it was only a matter of time before such evidence came to light, but this has not proven to be the case.

Any such alleged evidence is always whisked away by the military or covered up, leaving us with only stories. Yet, on occasion, we get a story of a piece of UFO or something of the sort, and one of these is the tale of a man who claimed to have retrieved a mysterious artifact dropped from an alien craft over the desert.

One evening in 1985., a man named Bob White was driving with a friend on their way from Denver to Las Vegas. At the time, White was asleep and his friend at the wheel, watching the hypnotic lane lines flicker by as they meandered through the remote wasteland between Grand Junction, Colorado and the Utah border.

Here was a place in which there was not another soul for miles around, a moonscape of rocky desert that expanded out past the illumination of the headlights in a vast expanse of nothingness, and it would have been a rather dull drive until a weird series of events began to play out that made the evening a bit more exciting.

At around 2:30 am., White was jolted awake by his friend. Wiping the sleepiness from his eyes and watching the nighttime desert streak by outside, he at first couldn’t figure out why his friend had woken him. It wasn’t his turn to be at the wheel and nothing at first seemed out of place, the car smoothly rolling along, but his friend was in a state of agitation. When White asked what was going on, his companion frantically pointed off towards the horizon, and it was then that he could see a strange light off in the distance, which did not look like an airplane. The light steadily grew in size and brightness until it was blinding, turning the desert night into day, and White would say of what happened:

The light was about the size of a full harvest moon. As we got closer, it grew larger. When we were a few hundred yards from it, I turned off the ignition and we coasted up close to it. It was huge, the size of a very big barn. I got out of the car for a better look. For some unknown reason, Jan turned on the headlights, and this light went up in the sky as fast as my eyes could follow it. What I saw, was not of this Earth. Then I saw another small light, bright orange with a tinge of yellow, white, and blue falling from it.

After this, the larger object rose into the air rapidly, joined with an even larger object, a sort of “mother ship,” and the whole of it shot off into the night, leaving the two frightened men there alone in the dark desert once again to try and process what they had just seen. Overcome with curiosity, White started hiking off through the scrub through the wilderness towards where he estimated the smaller object had fallen, making his way up an incline to find a groove in the ground, which he estimates as having been around 18 inches deep and 9 inches wide.

Within this groove was a glowing object, about 7-1/2 inches long and shaped like a teardrop, still too hot to get anywhere near and apparently made of some kind of metal. White waited until it had cooled down enough to touch, and then brought it back to the car, stashing it into the trunk. 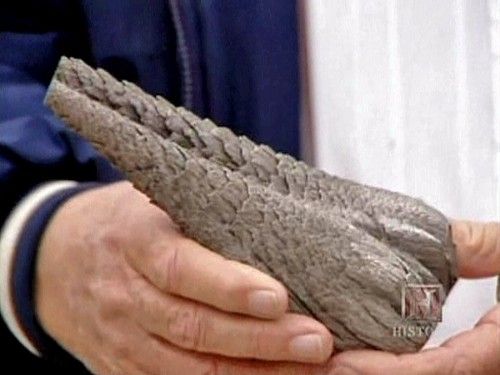 White: who claims to have never believed in UFOs before this incident, was baffled as to what the object could possibly be, but did not know who to turn to for help or what to do with it. He kept it locked in a safe deposit box to keep it safe, and in the meantime traveled about trying to raise interest in his discovery, traveling to conferences, and trying to get the object tested. He even opened his Museum of the Unexplained, which would hold the object high as its main attraction. In 1996, a small sample of the object was finally tested by the New Mexico Institute of Mining and Technology, which didn’t come to any firm conclusions, but did have this to say:

The metallurgical analysis was pretty mundane. We didn’t find any evidence that it was extraterrestrial. Now you can make the argument that we didn’t spend $1 million and look at every conceivable option. We didn’t cover every base.

A second laboratory came to a similar conclusion, deflating hope that this was an alien device or piece of a spaceship. Undeterred and convinced of the object’s otherworldly nature, White decided to keep trying, sending in samples to the Los Alamos National Laboratory, New Mexico Tech, and the Geosciences Research Division of the Scripps Institute in La Jolla, California, for more thorough analyses. One of White’s partners, a Dr. Robert Gibbons, a former scientist with NASA, would say of the results of these further tests:

So, what does this all mean? Well, the most rational explanation is that this is exactly what the object is: a meteorite. This could also explain the strange sighting the two men had had to some degree, although it doesn’t explain the presence of the massive UFO they had supposedly seen or the “mothership” is attached to before speeding off into the night. Other ideas are that they saw debris from a satellite falling or some naturally occurring celestial phenomenon and that the weird object he found was completely unrelated.

Then there is the possibility that this is all just a hoax. All of these possibilities White strongly denied. He never tried to get rich off of his findings, and whatever he did find out there in the desert, he certainly seemed to have at least truly believed it was real, once saying of his crusade to get the object recognized:
This is the most difficult thing I’ve ever done in my life. I’m 73 years old. I don’t have much longer. What I’d like to see before I’m gone is the national media get their heads out of the sand. I’d like to see the national media and everybody else realize that what I have is real. I don’t know what I have to do to prove this is the truth. You can’t make this stuff up.

He would continue to adamantly stick to his story and defend his strange discovery all the way up to his death in 2009, but the object would stay locked away in his museum, where it remains to this day. What exactly did he find out there in the desert on that fateful night? Is this a piece of meteorite, space debris, just a weirdlooking rock, a hoax, or something else? As of yet, there is no proof that the object is anything more mysterious than a rock or meteorite, but it is still a pretty odd story all the same and managed to get a lot of attention in its time as a piece of possible physical evidence from a UFO.