Underwater “Millennium Falcon”: Scientists are haunted by signals from a mysterious object at the bottom of the Baltic Sea

A strange object was discovered by the Swedes in the Baltic Sea at a depth of 87 meters. It appeared to be a starship and as though it had just left the Star Wars set

by TheStrangeTales
in Ancient, Paranormal
A A

In particular, Stefan Hogerborn is still of the opinion that the men have discovered something special despite the scientists' explanations to the contrary

Oceanologists came as close to solving one of the most puzzling anomalies’ mysteries in 2018.

Ocean X, a Swedish business run by Dennis Osberg, specializing in learning the mysteries of the seafloor.
This is not only a strong group of enthusiasts, but also a technologically advanced organization, at the helm of the 56-meter OceanX MV Alucia, a research vessel outfitted with cameras and a helipad.

They were the first to catch a huge sea squid, study sinkholes, collect the debris from the bottom of the Atlantic Ocean after the accident of an Airbus A330 in 2009, and test a prototype of the Orpheus deep-sea drone created by the Woods Hole Institute and NASA.

They found the remains of the Russian submarine Som, which sank a century ago, in the territorial waters of Sweden in 2015 thanks to a tip from a Russian coworker.

A strange object was discovered by the Swedes in the Baltic Sea in 2010 at a depth of 87 meters.
It appeared to be a starship and as though it had just left the Star Wars set.

The “loading chamber,” a huge platform with a runway where the divers appeared to be little fish, was the principal feature of the ship. Divers have given it the moniker “Baltic Anomaly,” and it has sunk to the ocean floor. The theory that the strange object was formed of was supported by a chemical study of the substance from which it was made.

Scientists were able to inspect a circular item from the ocean floor that was 60 meters in diameter and had the perfect geometric shape without any sharp edges thanks to the first images taken from a great depth.

The unidentified ship appeared to be landing because a 300-meter strip of the bottom was visible close to the discovered object.

“Alien ship,” “Millennium Falcon,” alluding to Han Solo’s spacecraft from the same “Star Wars,” were yelled by the yellow media.

Fans of alternative history who examined the Ocean X data claimed that the enormous item contained a piece of Atlantis, however a more realistic explanation claimed that it was a “Russian ship.”
Someone mentioned the facility’s clear use of ramps and steps.

It was a metal or an alloy of metals that was not present in nature, he remarked.

Journalists and alternative historians persisted, and soon a theory that a Nazi submarine from the Third Reich’s covert projects is submerged in the Baltic Sea surfaced.

The idea was supported by the historical evidence that the Germans frequently conducted their covert tests there and that Rügen Test Site, which was nearby and eventually converted into a missile base, was not far away.

All assumptions were met with suspicion by scientists.

They pointed out that the photograph of the object was of low quality, and that in situations like this, people tend to imagine things that never existed or are not, finishing them.

Although the discovery was peculiar and appeared to have been made by human hands or by the assistance of an alien intellect, archaeologist Göran Ekberg highlighted that this was far from the first such artefact in the planet. 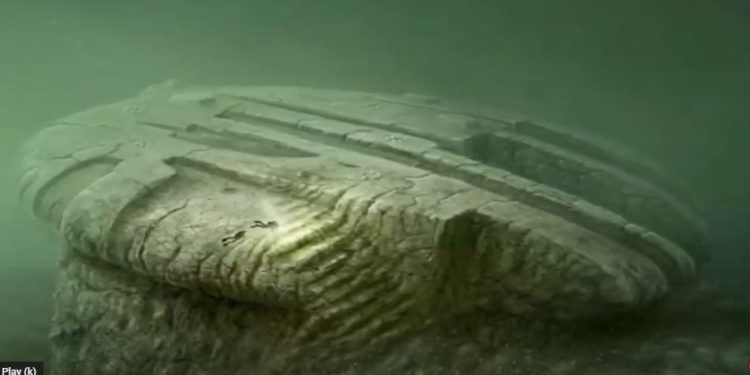 But it’s noteworthy to note that Ocean X’s computations and the findings of the Stockholm geologists’ study were promptly taken down from public databases.

Additionally, it was known that the Swedish and Norwegian special services had been assigned to handle the matter.

As they discussed the discovery, divers from the Ocean X team exhibited anxious expressions.

In particular, Stefan Hogerborn is still of the opinion that the men have discovered something special despite the scientists’ explanations to the contrary.

This interpretation is further backed by the information that some “electromagnetic bursts” resembling submarine terrestrial sonars were captured in the first published documents.

Along with the majority of the information regarding the underwater anomaly, information about them also vanished from the public realm.

Additionally, divers asserted that it was impossible to snap images of the object in good resolution.
Why?

There are various explanations for this phenomenon, ranging from electromagnetic fields to a force that renders technology inoperable.

Scientist Peter Lindberg, the primary skeptic, spoke with journalists multiple times and claimed that this was the oddest discovery of his life and that he had more questions than answers.

And then he abruptly stopped talking.

He told reporters that within a 25 meter radius of the discovery, all telephones and other electrical devices stopped working.

All crew members suffered from migraines and fever for approximately a month after being submerged in the water, as if they had been heated in a huge microwave.

Who and why could have given the order to terminate this operation and shift to looking for other objects has not yet been explained, which leads to another anomaly. It’s true that there are enough of them at the bottom of the Baltic Sea.

But it appears that someone made an effort to stop this tale forcibly. Ordinary divers are officially prohibited from diving at this location to the ocean floor.

Scientists from Stockholm University claimed that the “Baltic Anomaly” is a geological phenomenon in 2018, and that it is unwise to hunt for evidence of extraterrestrial life where none exists.

Other queries about electromagnetic radiation and health issues were not addressed by the researchers.